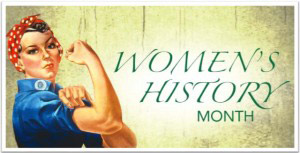 The 2022 Women’s History theme, “Providing Healing, Promoting Hope,” is both a tribute to the ceaseless work of caregivers and frontline workers during this ongoing pandemic and also a recognition of the thousands of ways that women of all cultures have provided both healing and hope throughout history.

Women as healers harken back to ancient times. Healing is the personal experience of transcending suffering and transforming it to wholeness. The gift of hope spreads light to the lives of others and reflects a belief in the unlimited possibilities of this and future generations. Together, healing and hope are essential fuels for our dreams and our recovery.

This year, in particular, we are reminded of the importance of healers and caregivers who are helping to promote and sustain hope for the future. The NWHA encourages communities throughout the country to honor local women who bring and have historically brought these priceless gifts to their families, workplaces, and neighborhoods, sometimes at great sacrifice. These are the women who, as counselors and clerics, artists and teachers, doctors, nurses, mothers, and grandmothers listen, ease suffering, restore dignity, and make decisions for our general as well as our personal welfare.

Women have long advocated for compassionate treatments and new directions in public health and in women’s mental and physical health. Women have also historically led the way in mending divisions, healing wounds, and finding peaceful solutions. This timeless work, in so many ways and in addition to so many other tasks, has helped countless individuals in our communities recover and follow their dreams.

The 2022 theme proudly honors those who, in both public and private life, provide healing and promote hope for the betterment of all.

Belva Ann Bennett Lockwood - first woman to argue before the US Supreme Court.

Simone Biles - tied as the most decorated gymnast of all time.

Shirley Chisholm - first African American woman in Congress and the first woman and African American to seek the nomination for President of the US from one of the two major political parties.

Tammy Duckworth - first woman with a disability elected to Congress and the first Senator to give birth while in office.

Emerald Fennell and Chloe Zhao - 2021 was the first year that two women were nominated in the Academy Award Best Director category.

Aretha Franklin - first woman inducted into the Rock and Roll Hall of Fame.

Carla Hayden - first woman and first African American to be Librarian of Congress.

Kamala Harris - sworn in as Vice President of the United States.

Betty Mae Tiger Jumper - first (and so far) the only female Chief to the Seminole Tribe of Florida.

Jeannette Rankin - first woman elected to the US House of Representatives.

Michaela Jae Rodriguez - first transgender woman to be nominated for an Emmy award in a major acting category.

Janet Yellen - first woman to serve as Secretary of the Treasury.